Oakland, California’s Planet Booty took to the stage and were welcomed by Toronto with a hot fever. The group did not take long to kick the crowd into a sweat-soaked frenzy. This was my first time witnessing Planet Booty and the three-piece they did not disappoint!

Be a part of musical history and catch TWRP & Planet Booty on their “Together Through Time tour.”

“We really didn’t understand how awesome they were until we saw them live,” Doctor Sung said of Planet Booty. “I vividly recall being two songs into their set, and me and one of the other guys in TWRP just looked at each other with dumb grins on our faces, and almost in unison proclaimed, ‘This is my new favorite band.’”

PLANET BOOTY: In addition to being great guys that are fun to spend time with, the band had an amazing year. They played shows in SF as well as festivals like SxSW, Santa Cruz Music Festival, and performed in cities like Seattle, Portland, Los Angeles, Pontiac, Iowa City, Chicago, Phoenix, Albuquerque, and Denver. If you’re fortunate enough to see them in a venue near you, watch out for Dylan, he’s bound to release the freak inside you while progressively getting more naked.

I remember the euphoric sense of freedom I felt the first time I saw Planet Booty perform at Oakland’s Starline Social Club. Leaning against a pillar, I watched the already fervent crowd cry for more as the electro-funk R&B trio exercised their right to funk. By the end, frontman Dylan Germick stood smiling before the rowdy mob in his tiny, sparkly underwear.
… END_OF_DOCUMENT_TOKEN_TO_BE_REPLACED

Nominated for Best Band in this year’s Best Of The East Bay contest, Planet Booty is on the rise and for good reason. Maybe it’s their radiant energy and stage presence, or perhaps it’s the unique mix of elecro-funk, soul, and live instrumentation. Either way, Planet Booty is coming to Oakland on Friday, and you should be stoked.
… END_OF_DOCUMENT_TOKEN_TO_BE_REPLACED

Sex is in the air for Planet Booty, the high-energy electro-funk trio whose latest single was inspired by the sights and spirit of the East Bay city the band calls home.

“I got the song in my head one day when I was walking around Oakland. It was a beautiful warm day, one of those days where every lady you see has got a little cute dress on. All the guys are walking around, got their sunglasses on. People just have a smile on their face,” singer Dylan Charles Germick said.
… END_OF_DOCUMENT_TOKEN_TO_BE_REPLACED

In The Flesh: Planet Booty, Dadsdad, and B4Skin at The Flycatcher. Gnarly!

Oakland, California’s Planet Booty kicked its show open with some funk-pop. Their music sounded like a mixture of Bruno Mars and LMFAO—funky groovy playful pop, y’all. The trio energized the crowd like pros. The audience danced, unable to keep their asses in seats. Singers Josh Cantero and Dylan Germick hypnotized; when the latter body rolled, the crowd body rolled.

Wallflowers and dance machines let loose on the dance floor. If you weren’t dancing, then you weren’t there.

When I saw Alex Lahey open the main stage Splendour in the Grass in 2016, my friend declared after her set that “the rest is gravy”. After seeing Planet Booty on the first night, it’s my turn to say it. The rest of SXSW is gravy. Stepping into the venue, I walk and then run into the photo pit because the photo opportunities are flying in thick and fast. Planet Booty from Oakland, CA are having some genuine, hair-down, sweaty fun. The lead singer Dylan Germick jumps into the crowd to grind and dance with the audience multiple times. A lot of warm fuzzies are tossed around, “It doesn’t matter what you look like…you are something to be celebrated…be a 110% yourself”. If you ever need a pick me up, put a Planet Booty gig on your medication list. 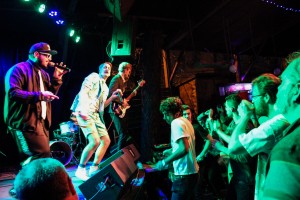 Picking a good band name isn’t easy. As long as band names have existed, there have been good and bad ones. For every Grateful Dead, which is a good band name, you also have a Herman’s Hermits, which is a bad band name. So what exactly makes one great and one crummy? …WE DON’T KNOW, MAN!
… END_OF_DOCUMENT_TOKEN_TO_BE_REPLACED

The Santa Cruz Music Festival took place last weekend. Pacific Avenue in downtown Santa Cruz hosted local vendors, a comedy jaunt, yoga classes, a bike party, a live discussion panel, and much more. Let’s talk music though — with so many different genres teaming up to put on a multi-faceted showcase, it was quite an exhibit.

One of the acts that took the Blue Lagoon stage on Saturday night was Oakland’s own, Planet Booty. The trio consists of Dylan Germick, Josh Cantero, and Rob Gwin. Planet Booty is a group who can’t simply be labeled under one genre. Rather, a melodic mix of old-school funk, soul, jazz, dance, house, disco, and R&B. Planet Booty also incorporates electronic beats with live instrumentation for an original, but unique sound. The Express spoke with Dylan Germick, the group’s lead singer.